For a good time… support The Foxy Merkins!

Join Filmwax, Zachary Levy and Stan “Stanless Steel” Pleskun for a special screening of Strongman in celebration of its long-awaited DVD and digital release this Wednesday, October 23rd.

Zachary Raines and his team from “Freeloader” hope to return with another black comedy-of-errors and they need your help on Kickstarter to make it happen!

After screening Sean’s latest short “American Juggalo” on Thursday, we bring your attention to his hit short from last year, an eye-popping jaw-dropping doc about a bowling hustler.

WATCH “WHERE SOLDIERS COME FROM”

If you missed Heather Courtney’s powerful and important film Where Soldiers Come From at last year’s Rooftop Summer Series, it is now available for streaming or download. 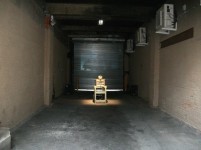 After a great run at the 2011 Rooftop Summer Series, Christian Zwanikken’s robots will return to the screen for a theatrical run! Jarred Alterman’s bizzare and beautiful documentary, Convento, is set to premiere at Brooklyn’s reRun Gastropub Theater beginning next Friday, March 9.

The Dish & The Spoon at reRun

Everyone has seen it. Wife has husband, husband cheats on wife, wife gets angry. The story has played out many a time, but somehow Alison Bagnall’s beautifully understated film The Dish and the Spoon doesn’t just tell this story, it lets you live it.

The City Dark Brightens Screens at IFC this Jan

After months of touring festivals and screens around the country, the 2009 Filmmakers Fund Grantee Ian Cheney’s “The City Dark” has returned for its theatrical premiere at the IFC Center on January 18th.

Need a break from the post-holiday winter doldrums? (Has it only been a week?) Laugh it off all weekend at reRun at the theatrical premiere of Madeline Olnek’s sci-fi comedy film “Codependent Lesbian Space Alien Seeks Same.”

Filmmaker Robert Greene dares to bring his documentary Fake It So Real back to Brooklyn? Not in our house!