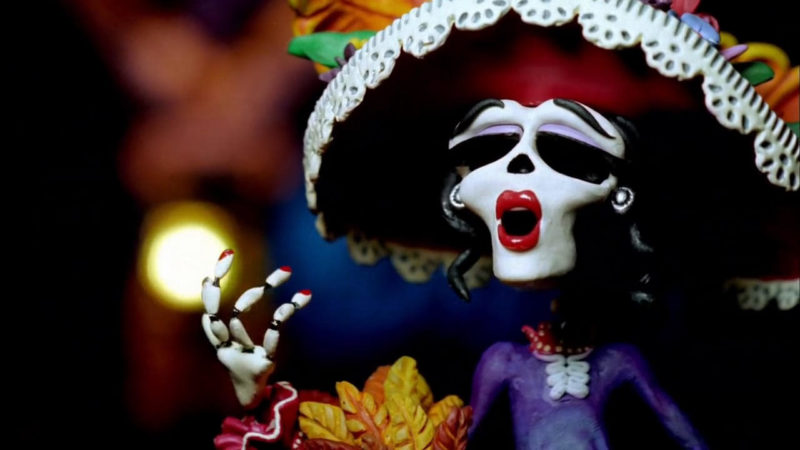 Last stop. There is no return…

$8 online or at the door (cash or credit); free for Rooftop members

Rooftop Films and Brooklyn Army Terminal celebrate Halloween and Día de Muertos with a program of the season’s creepiest, eeriest and most horrifying short films. Filled with grisly deaths and jump scares, these films explore the existential terror of apocalypses, nightmares within nightmares, and New York City real estate. When the show is over and you’re back in your apartment trying desperately to fall asleep, you’ll remember not just the frights that lurk under the bed, but also the ones that jump in the bed with you.

A woman gets stuck in a Red Lobster commercial.

Hasta Los Huesos (Down to the Bone)

A man lands in the land of the dead, where he is welcomed as a guest by worms, laughing corpses and a famous singer, also a hostess skeleton. This `life' isn't that bad at all.

A young deputy fights for his life when a tormented mental patient escapes an asylum in Florida.

Walking home after school, Kenny and Ray talk about their frustrations with girls and sex. When one calls the other one out for lying, an argument leads to an opportunity for exploration, and a lesson about consent.

Do you remember your ABCs? We think you do! Sing along with this group of animated Mariachi social documentarians who will guide you through imperial history that will make you laugh, cry, and wonder why.

A teenager riding home on her bicycle late at night becomes the object of predatory attention.

A likely story of an unbreakable friendship between a woman and her cat. We need them. Do they really need us?

PYOTR495 is an award-winning short film set in Russia in the year 2014. The country has invaded the Ukraine, the newly instated LGBT Propaganda Law makes it illegal to present gay life as normal, while Russian President Vladimir Putin's approval rating is at a 6-year high. We begin in the run-down, white Soviet-era tower blocks in the Cheryomushki district of Moscow, and follow our character, Pyotr, as he leaves his apartment and ventures out into the night on his scooter and under the passing lights of the city streets as he is baited into a dangerous scenario at the sprawling apartment of a member of one of Moscow’s financial elite.

Jeremy moves into a new apartment. He hasn't met his roommate yet and soon understands they will struggle to connect...

Jack and Jill are always hurting each other's feelings.

When Natalie learns that Elliott is ticklish, things get bad. And then they get worse.

7:00 PM
Doors Open
7:45 PM
Films Begin
9:30 PM
Q&A
9:45 PM
After-Party
NOTE: Many of the films in this program are genuinely terrifying and include depictions of graphic violence. Event is restricted to 21 & over (unless accompanied by an adult) and will be held indoors in the Brooklyn Army Terminal Annex Building. No outside alcohol is permitted.