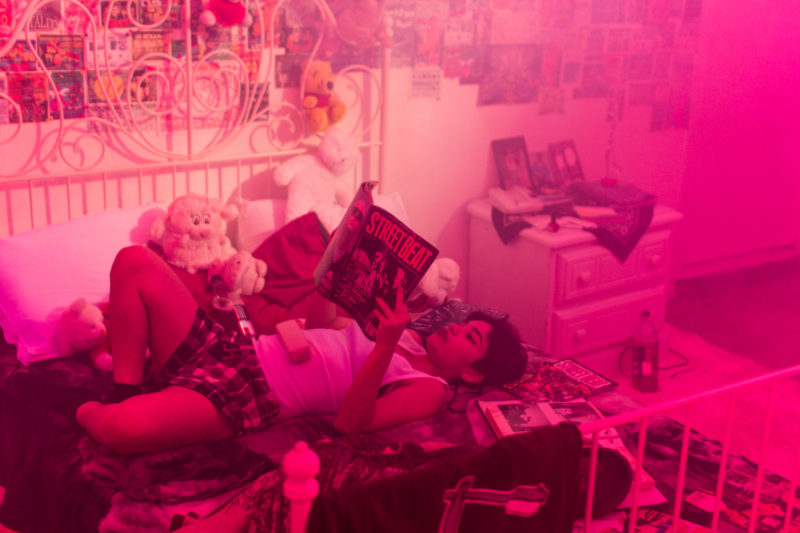 This is What We Mean by Short Films: Opening Night 2018

Online sales are closed. You can purchase tickets at the box office starting at 7PM

Rooftop launches the 22nd Summer Series at our newest venue, Green-Wood Cemetery, with a program of amazing new short films featuring singing fish in existential crises, graveyard reveries, neighborhoods mafias, ultraviolet scorpions, and the irresistible temptation of milk and cookies. These highly entertaining films tear apart tired old structures and display the creative potential of the cinematic form. Not to mention, we have the cutest dog in the world (really though).

A dark musical enacted in a modern market place, situated next to a large freeway. The employees of the various commercial venues, portrayed as animals, deal with boredom and existential anxiety by performing cheerful musical turns. The apocalypse is a tempting liberator.

The Cutest Dog In The World

The world's cutest dog spends the day at home alone.

Julius Caesar Was Buried in a Pet Cemetery

A short documentary portrait of the greatest pet cemetery in the world.

This film explores the magic and dynamism of Blackness in a realm where time and space are altered. The now, the past & the future are rethought and reordered to create something soulful and mind bendingly visceral. Unfolding through the gaze of Jenn Nkiru, it is an audio - visual feast which pulls on broad yet unique sound and visual references to push the story forward. The soundtrack features music and sounds from James Baldwin, Sun Ra, Chance The Rapper, Donnie Trumpet & The Social Experiment, Rotary Connection, Pharaoh Sanders and Shafiq Husayn. It also includes quotes and moments from Alice Coltrane, Audre Lorde, Kwame Nkrumah, Sun Ra and James Baldwin.

“So You Like the Neighborhood” is a dark comedy and true story about a girl who gets dumped by her boyfriend and then evicted from her Brooklyn apartment, all in the same day. When she goes to drown her sorrows at a nearby bar, she befriends some locals who offer to help her with the eviction. They just so happen to be former mafia members, and by “help,” they mean something rather more nefarious. Things quickly spin out of control when she impulsively agrees to meet with a mafia hit man about “eliminating” her ex-boyfriend and landlord. ”So You Like the Neighborhood' is Jean Pesce's Graduate Thesis Film at NYU. It stars Tony Nominee, star of Epix's "Get Shorty" and Showtime’s "Billions": Sarah Stiles.

"To The Dead" is a cinematic essay made up of personal reflections and anecdotes that cumulatively weave an enigmatic portrait of Colombia’s political and social landscape. The film is narrated in the first-person by an individual meandering through Bogotá’s Central Cemetery. The narrative is infused with contradictory thoughts and emotions, becoming the subjective description of a past that is very personal, and at the same time, common to many.

The Town I Live In

In the Los Angeles neighborhood of Boyle Heights, local activists and members of the art community clash over the fate of a beloved neighborhood.

A woman named Kanchana is using voodoo on scorpions in a rainforest at night in Thailand under the influence of ultraviolet lights.

Absorbing the sounds of New York since her birth in Brooklyn, Tara spins a collage of sounds that captures the eclectic vibe of modern New York life.Having performed at diverse and unconventional venues around New York City, Tara is always eager to find new and exciting crowds to spin for. Early on in her career, Tara realized being a DJ is more than just playing a mix of records; it is a matter of building trust between herself and the crowd and sharing the knowledge and love the she has for the music and the feelings it projects onto the listeners. The crowd trusts Tara to become part of another great night in their lives, and she returns that favor by giving them a taste of the familiar as well as something new that may be something they have never realized was needed or missed in their musical memory.

"L'Rain is a beautiful mess of confounding songs, sound collages spliced together as a tapestry of grief, loss, and the brilliant moments of joy in between. Songwriter and frontwoman Taja Cheek references R&B as frequently as she touches on post-punk and avant-garde rock, incorporating each seamlessly enough to inspire an ambitious new hybrid genre. But rather than creating new ways to categorize its sound, L’Rain rejects labels and revels in the freedom this unconventional music provides."– Angel Fraden, Teen Vogue.

7:45 PM
Doors Open
8:30 PM
Live Music by L'Rain
9:00 PM
Films Begin
10:30 PM
Q&A
10:45 PM
After-Party and a set by DJ Tara, sponsored by Corona Extra, Ketel One Family Made Vodka and Fever-Tree Tonic
No refunds. In the event of rain, show will be rescheduled. No outside alcohol is permitted.