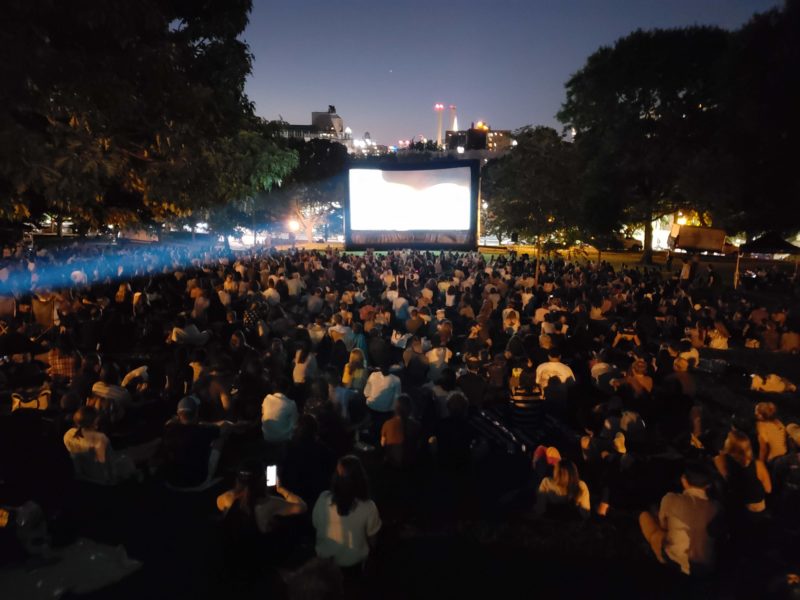 The IFP Filmmaker Labs Showcase gives audiences a first look at exciting new films, before their festival premieres. This outdoor screening features excerpts from the ten narrative and ten documentary films participating in the 2019 IFP Filmmaker Labs, which are dedicated to filmmakers in post-production on their first feature-length films.

The IFP Filmmaker Labs Showcase gives audiences a first look at exciting new films, before their festival premieres. This outdoor screening features excerpts from the ten narrative and ten documentary films participating in the 2019 IFP Filmmaker Labs, which are dedicated to filmmakers in post-production on their first feature-length films.

7:00 PM
Doors Open
7:45 PM
Live Music from Locobeach
8:15 PM
Showcase Begins
9:30 PM
Q&A
In the event of rain, show will be rescheduled at the same location. No outside alcohol is permitted.

Crestone (dir. Marnie Ellen Hertzler)
In the desert of Crestone, Colorado, a group of SoundCloud rappers live in solitude, growing weed and making music for the internet. When an old friend arrives to make a movie, reality and fiction begin to blur.

Eyimofe (This is My Desire) (dir. Arie Esiri, Chuko Esiri)
In Nigeria, two Lagosians work to better the lives of their families as tragedy and fate intervene

A Nightmare Wakes (dir. Nora Unkel)
An adaption of the novel Frankenstein as told through the life of its author, Mary Shelley. As she creates her masterpiece, she gives birth to a monster.

The Surrogate (dir. Jeremy Hersh)
The results of a prenatal genetic test complicate the relationship between a surrogate/egg donor and the couple for whom she’s carrying.

Tazmanian Devil (dir. Solomon Onita, Jr.)
After moving to Arlington, Texas, a 19-year-old Nigerian immigrant struggles to balance his conflicting desires of joining a college fraternity and bonding with his strictly religious father.

The Unknown Country (dir. Morrisa Maltz)
An unexpected invitation from her estranged Lakota family sends a grieving young woman on a road trip through the Midwest.

Beba (dir. Rebecca Huntt, Sofia Geld)
Set in New York City, Beba tells the personal history of a young Afro-Latina who is uncompromising in her commitment to learn to love every part of herself and to thrive in the face of social strife.

Frank Bey: You’re Going to Miss Me (dir. Marie Hinson)
In 1977, Frank Bey quit singing after a deal gone wrong with James Brown. Now, the aging soul singer returns to the stage and finally, to Nashville.

The Last Out (dir. Sami Khan, Michael Gassert)
Three young Cuban baseball players leave their families and risk exile to train in Central America and chase their dreams of playing in the Majors.

A Place of Absence (dir. Marialuisa Ernst)
This poetic film follows director Marialuisa’s journey with Anita and Leticia, Central American women traveling to Mexico with the Caravan of Mothers of Missing Migrants.

Two Gods (dir. Zeshawn Ali)
A Muslim casket maker and ritual body washer in Newark brings two young men under his wing to teach them how to live better lives.