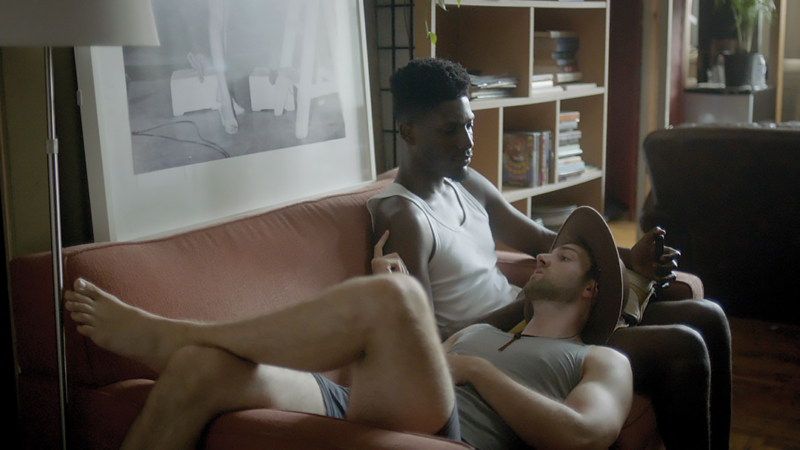 Emerging New York talent Matthew Fifer co-directs, co-writes, produces, and stars in Cicada, a powerfully intimate, sexy, and tragicomic debut feature, based on his own real experiences and those of his co-star/co-writer Sheldon D. Brown. The Brooklyn Boys shorts film program will precede this screening.

When the philandering Ben (Fifer) meets Sam (Brown) outside of The Strand bookstore, it seems the two may have finally found the elusive perfect gay New York romance. As they grow closer, however, Ben’s childhood traumas begin to bubble to the surface while Sam’s own PTSD is revealed, testing the waters of their strengthening bond. An essential examination of love, interracial relationships, and reconciling the past, Cicada surprises with its strong sense of heart, humor, and humanity — not to mention its beautiful exterior cinematography that reminds us of why we continue to call NYC home. The film also features lovely comedic work from local familiar faces such as Scott Adsit (30 Rock), Cobie Smulders (How I Met Your Mother), Jo Firestone (High Maintenance), and SNL’s Bowen Yang.

A gay man travels across the country to spend the weekend with someone he's been talking to for months on a dating app, hoping to find the kind of romance that he grew up thinking he'd never get to experience.

Kind Of follows two trans masculine folks in a newly open relationship as they prepare to host brunch — while hashing out their insecurities in the minutes before their friends arrive.

Who Can Predict What Will Move You

Two boys caught in a rivalrous relationship spend one last night together in Brooklyn.

Are We Here Yet?

A couple discovers they don't know as much as about each other as they thought while they move into their new apartment.