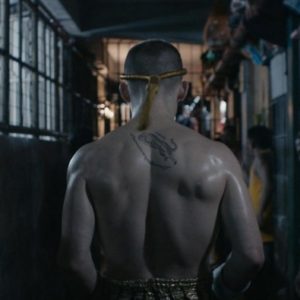 A Prayer Before Dawn

The action-packed true story of a relentless Muay Thai boxer fighting his way through a Thailand prison.

A Prayer Before Dawn

The remarkable true story of Billy Moore, a young English boxer incarcerated in two of Thailand's most notorious prisons. He is quickly thrown into a terrifying world of drugs and gang violence, but when the prison authorities allow him to take part in the Muay Thai boxing tournaments, he realizes that this might be his chance to get out. Billy embarks on a relentless, action-packed journey from one savage fight to the next, stopping at nothing to do whatever he must to preserve his life and regain his freedom. Shot in an actual Thai prison with a cast of primarily real inmates, "A Prayer Before Dawn" is a visceral, thrilling journey through an unforgettable hell on earth. An A24 release.

Vorhees is the nom de guerre of New York City based audio engineer and sound designer Dana Wachs. Focusing on a an ambient approach to music, from shorter pop structured songs to longer soundscapes, Vorhees is a one woman show. Live, guitar tones are processed and extracted through a haze of vintage analogue gear resulting in dulcet ringing to aggressive, sneering fuzz over muted electronic beats. Floating on top drenched in peculiar reverbs, her vocals exist in an ethereal climate, lyrically exploring intimate observations around her. Taking a break from traveling the world as an audio engineer (previously for the likes of Cat Power, MGMT, M.I.A., Lykke Li, and St. Vincent to name a few) Vorhees continues to delve into composition (lauded a “fine collaborator.” by the New York Times for her work with choreographer Heather Kravas) and recording for a future full length.

8:00 PM
Doors Open
8:30 PM
Live Music from Vorhees
9:00 PM
Film Begins
11:00 PM
Q&A with Jean-Stéphane Sauvaire & Joe Cole
No refunds. Seating is first come, first served. In the event of rain, show will be rescheduled. No outside alcohol is permitted. After-party admission is by invitation only.