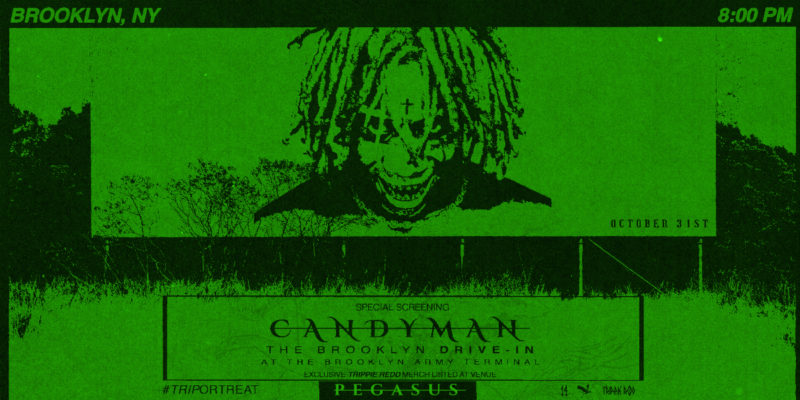 Join Trippie Redd and celebrate his long-awaited album, Pegasus, at one of his drive-in movie screenings.

$50; one ticket admits one car

Join Trippie Redd and celebrate his long-awaited album, Pegasus, at one of his drive-in movie screenings in Los Angeles, Miami, Atlanta, and New York City on the evening of the project’s release! Each location will be showing Candyman (1992), Trippie’s favorite Halloween film, and there will be exclusive merch available for purchase.

His first full-length project since his Billboard #1 album A Love Letter To You 4, Trippie Redd’s latest Pegasus is an ambitious 26-track project, featuring previously released singles like “Excitement” with PARTYNEXTDOOR and “I Got You” with Busta Rhymes. The album also includes features from Lil Wayne, Young Thug, Future, Quavo, and more.

Student Helen Lyle (Virginia Madsen) learns of the terrifying local legend of The Candyman (Tony Todd) – a hooked serial killer who appears when you say his name in a mirror, five times. Rated: R

For entry, drive southbound down 1st Avenue to the corner of 58th Street. Entrance is at 80 58th St. Signs and members of staff will direct you to the Drive-In upon arrival.

PLEASE NOTE: Candyman is rated R (for violence and gore) and may not be considered appropriate for younger audiences. Viewer discretion is advised.