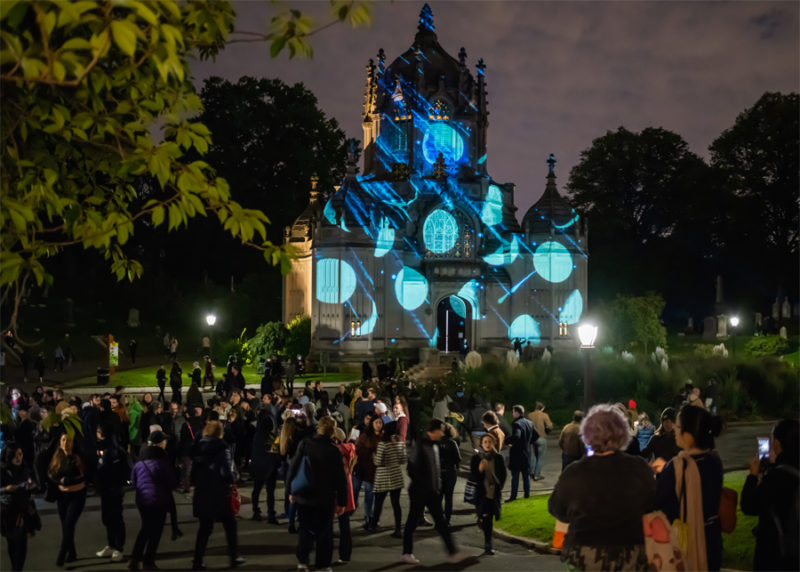 After a two-year hiatus, the crowning event of Green-Wood’s fall season returns!

After a two-year hiatus, the crowning event of Green-Wood’s fall season returns! This celebration of life, death, and all that’s in between, stretches across winding paths deep into the darkness of the Cemetery.

Around every corner you’ll encounter performances that are sure to delight and amaze. Join us in this opportunity to once again gather together for music, entertainment, and relishing the ambiance of one of New York City’s greatest treasures: Green-Wood.

From a mere technical point of view the TV/video screen comes alive by a controlled beam of electrons in the cathode ray tube. For ‘Energie!’ an uncontrolled high voltage discharge of 30.000 volts exposes multiple sheets of photographic paper which are then arranged in time to create new visual systems of electron organization. Music by Jens Thiele.

The second movement of Gotham, a symphony-film collaboration by the composer Michael Gordon and filmmaker Bill Morrison.

In 1920, photographer and painter Charles Sheeler asked photographer Paul Strand to collaborate on a filmed portrait of Manhattan. The film they made, titled Manhatta after Walt Whitman’s poem, “Mannahatta,” which inspired it, echoes the form and spirit of the poet’s exalting verse. Structured more as a series of vignettes than as a linear narrative, it is cited as the first avant-garde film to have been made in America.

On a cold winter morning, a lone piano stands curbside in New York City. Passersby slow, stop, and play. Some play well. All day long they collect and disperse, and into the night they measure and shove and deliberate. What if…? Can we take it? Who abandons a piano?

Plinking slightly out-of-tune over the white noise of Broadway’s cars, buses, trucks, and sirens, the piano awaits its fate. Solo, Piano – NYC is a 5-minute film of the last 24 hours of a once-wanted piano.

A mind in the city looks inward, and escapes into the rabbit's domain.

An egg and an apple build competing broadcast towers that vie for the attention of a transistor radio. With its complex characterization and narrative of animal evolution, competition and reproduction, Seed is a beautiful and sinister stop-motion story about the struggle to survive.

All attendees must be over 21 years of age.

In accordance with CDC, and New York State and City guidance, masks are optional. Attendees must follow ALL instructions and guidance from Cemetery staff and ambassadors.

Check-in takes place, beginning at 6:30pm, at the meadow near the Main Entrance at Fifth Avenue and 25th Street. There are no paper or e-tickets, attendees will be checked in by name.

This event takes place at night, in the dark, with only ambient lighting. Attendees are strongly encouraged to wear suitable footwear and bring flashlights. Some performances will involve walking up hills or stairs, as well as grassy and uneven terrain.

In case of inclement weather, tickets will not be refunded, but can be used on the rain date of Saturday, October 22nd, 7-10pm. Cancellations will be announced via Eventbrite email blasts, so check your email and spam folders.