Supported Films and Alumni at Sundance 2019

These types of asks are awkward, we get it! We’re not professional fundraisers, we’re film lovers—just like you—but the programs that support Rooftop grantees and alumni filmmakers (like those listed below) depend on your support. 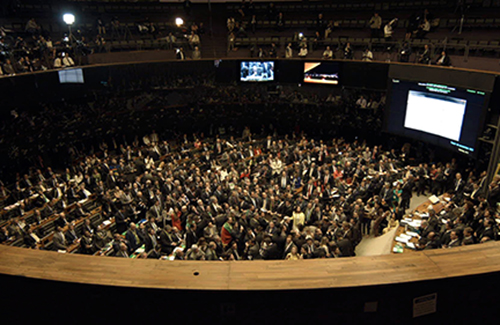 A cautionary tale for these times of democracy in crisis – the personal and political fuse to explore one of the most dramatic periods in Brazilian history. With unprecedented access to Presidents Dilma Rousseff and Lula da Silva, we witness their rise and fall and the tragically polarized nation that remains. A successful “house tuner” in New York City, who calibrates the sound in people’s homes in order to adjust their moods, meets a client with a problem he can’t solve. Cast: Peter Sarsgaard, Rashida Jones, Tony Revolori, Austin Pendleton.

A look at the intersection of religion and activism, tracing the rise of The Satanic Temple: only six years old and already one of the most controversial religious movements in American history. The Temple is calling for a Satanic revolution to save the nation’s soul. But are they for real?

Valentina, a day-walking Black vampire protected from the sun by her melanin, is forced to restrain her bloodlust to regain custody of her estranged daughters.

FILMS SCREENED DURING THE 2018 SUMMER SERIES

Undocumented immigrants forced to spend months in detention are turning to private companies to secure their release on bond. In exchange, immigrants pay exorbitant monthly fees for a GPS ankle monitor they can’t remove.

Two men accidentally exchange briefcases. One contains a videotape that will lead the new owner to embark on an unexpected journey to figure out what is in it.

A chronicle of the crimes of Ted Bundy from the perspective of Liz, his longtime girlfriend, who refused to believe the truth about him for years. Cast: Zac Efron, Lily Collins, Haley Joel Osment, Kaya Scodelario, John Malkovich, Jim Parsons.

As a couple goes on a trip to find their way back to each other, a sideshow artist and his shady entourage emerge from the woods, terrorizing them, luring them deeper and deeper into a maelstrom of psychological terror and humiliating slapstick. Cast: Leif Edlund, Ylva Gallon, Peter Belli, Katarina Jacobson.

Jimmie Fails dreams of reclaiming the Victorian home his grandfather built in the heart of San Francisco. Joined on his quest by his best friend Mont, Jimmie searches for belonging in a rapidly changing city that seems to have left them behind. Cast: Jimmie Fails, Jonathan Majors, Rob Morgan, Tichina Arnold, Danny Glover.

In Mexico City’s wealthiest neighborhoods, the Ochoa family runs a private ambulance, competing with other for-profit EMTs for patients in need of urgent help. As they try to make a living in this cutthroat industry, they struggle to keep their financial needs from compromising the people in their care.

Two lives intersect in Mumbai and go along together. A struggling street photographer, pressured to marry by his grandmother, convinces a shy stranger to pose as his fiancée. The pair develops a connection that transforms them in ways that they could not expect. Cast: Nawazuddin Siddiqi, Sanya Malhotra.

After discovering a disturbing video from a night she doesn’t remember, sixteen-year-old Mandy must try to figure out what happened and how to navigate the escalating fallout. Cast: Rhianne Barreto, Charlie Plummer, Poorna Jagannathan, J.C. MacKenzie, Nick Galitzine, Lovie Simone.

What begins as a documentary following the final tour of a dying magician — “The Amazing Johnathan” — becomes an unexpected and increasingly bizarre journey as the filmmaker struggles to separate truth from illusion. Cast: Johnathan Szeles.

Red Guy, Yellow Guy and Duck are roommates in the small town of Clayhill, and things are simple until Mayor Pigface disappears.

Wu-Tang Clan: Of Mics and Men |  Directed by Sacha Jenkins

The pioneering hip-hop collaborative, the Wu-Tang Clan, appear in this series that looks at the group’s cultural history and the balancing act between business and brotherhood.

America | Director and screenwriter: Garrett Bradley – A cinematic omnibus rooted in New Orleans, challenging the idea of black cinema as a “wave” or “movement in time,” proposing instead, a continuous thread of achievement.

The Dispossessed | India; director and screenwriter: Musa Syeed – Hazari is a traditional faith healer, exorcising patients who’ve been possessed by jinn. But in Kashmir, amid the world’s longest running conflict, nothing is as it seems.

Feathers | Director and screenwriter: A.V. Rockwell – Elizier, an emotionally-dejected new enrollee at The Edward R. Mill School for Boys, must overcome memories of a tragic past and present hazing by his peers in order to tackle larger issues dominating his young life.

The Minors | Director and screenwriter: Robert Machoian – A slice of life about a grandpa and his grandsons, the future and the past.

Octane | Director and screenwriter: Jeron Braxton – A man’s street race through hell and back parallels the black experience in America.

Old Haunt | Director and screenwriter: Andre Hyland – A procrastinating writer stays in an Airbnb to get some work done, but after an unexpected visitor arrives, finds himself in an increasingly unsettling set of situations that he can’t explain.

Reneepoptosis | Director and screenwriter: Renee Zhan – Three Renees go on a quest to find God, who is also Renee. As they traverse the mountains and valleys of Renee, they discover all the great joys, sorrows, and mysteries of being Renee.

Under Covers | Director and screenwriter: Michaela Olsen – On the night of a lunar eclipse, we uncover the sweet, salacious, and spooky secrets of a small town. From a pigtailed psychopath to naughty nuns, this stop-motion animated film conjures a comforting thought: that weird is relative.