In film and at our events, place is key. This summer, we’ll dive into the history of our newest venues and we start with Green-Wood Cemetery, host to Opening Night, Damsel, New York Nonfiction and more to be announced soon. 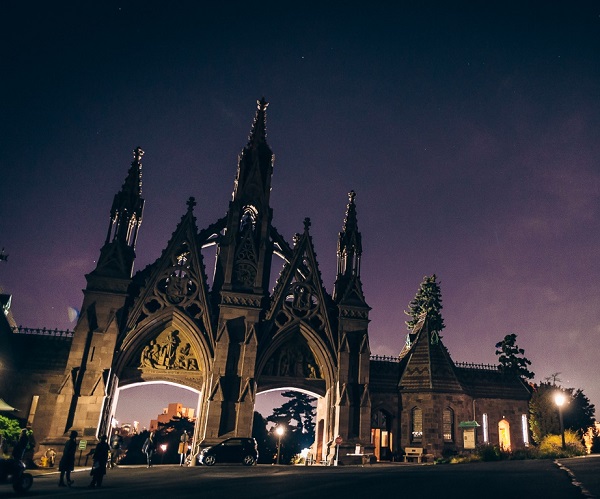 “It is the ambition of the New Yorker to live upon the Fifth Avenue . . . and to sleep with his fathers in Green-Wood,” an article in The New York Times said in 1866.

The land that became the cemetery was selected for its rolling hills and ponds, created by the movements of Ice Age glaciers across Long Island. The area was host to the 1776 Battle of Brooklyn, the largest battle of the American Revolution. The deadliest fighting of the battle took place on a 220-foot-tall bluff (the highest natural point in the borough) that would take the name Battle Hill in memory of the fighting. A monument to the battle, a statue of Minerva, the Roman goddess of war, was later erected on the hill and stares toward the Statue of Liberty and he statues’ views of one another are protected from development in perpetuity. Minerva was originally meant to gaze toward the Woolworth Building, a symbol of American commerce and prosperity as Charles Higgins, who funded the statue was a businessman himself. He made his fortune with Higgins India Ink, which you can still buy today.

When Green-Wood Cemetery first opened, most people didn’t think of cemeteries the way we do today because people were typically buried in local churchyards. So the opening of Green-Wood, one of America’s first “rural” cemeteries, in 1838 was a bit of a spectacle. The creators were said to have been inspired by the inviting greenery of Père Lachaise Cemetery in Paris and the Magnificent Seven cemeteries in London. Both Central and Prospect Park were yet to be constructed and few of our now iconic cultural institutions existed, so Green-Wood Cemetery became a popular escape from the already crowded New York City (Brooklyn was still its own independent city at the time). By 1860, more than 500,000 people were visiting the cemetery every year. At that time in the U.S. only Niagara Falls drew more tourists.

While the cemetery still welcomes all visitors, it is home to over 560,000 permanent residents. Even a few famous New Yorkers from last year’s blog post about New Design High School have found eternal peace in Green-Wood. Boss Tweed is buried here. Victoria Woodhull is not but the preacher Henry Ward Beecher, his wife, Eunice and his mistress Elizabeth Tilton are. Woodhull was imprisoned in the Ludlow Street Jail for writing about Beecher’s affair with Tilton. Ludlow Street Jail was later torn down for the construction of New Design High School.

Some other famous names include:

Besides the gravesites of the dearly departed, I recommend you check out these sites in the cemetery:

Here Lie the Secrets of the Visitors of Green-Wood Cemetery
At Sophie Calle’s site-specific installation, visitors are invited to transcribe their most intimate secrets onto paper and lay them to rest in a grave designed by the artist. Read more about the installation on the Green-Wood website.

Monument to the Broolyn Theater Fire Victims
103 victims of the fire (many of them killed when the exit from the Family Circle, the cheap seats, was blocked) are buried in a mass grave near the cemetery’s entrance. A New York Times editorial about the fire stated, “It is difficult to discuss calmly the frightful disaster which happened in Brooklyn on Tuesday night. No such awful sacrifice of human life has ever been known in this country, shipwreck and the casualties of war alone being excepted.” Read more about the tragedy over at the Bowery Boys

*JOIN US AT OUR FIRST GREEN-WOOD EVENT ON MAY 19*